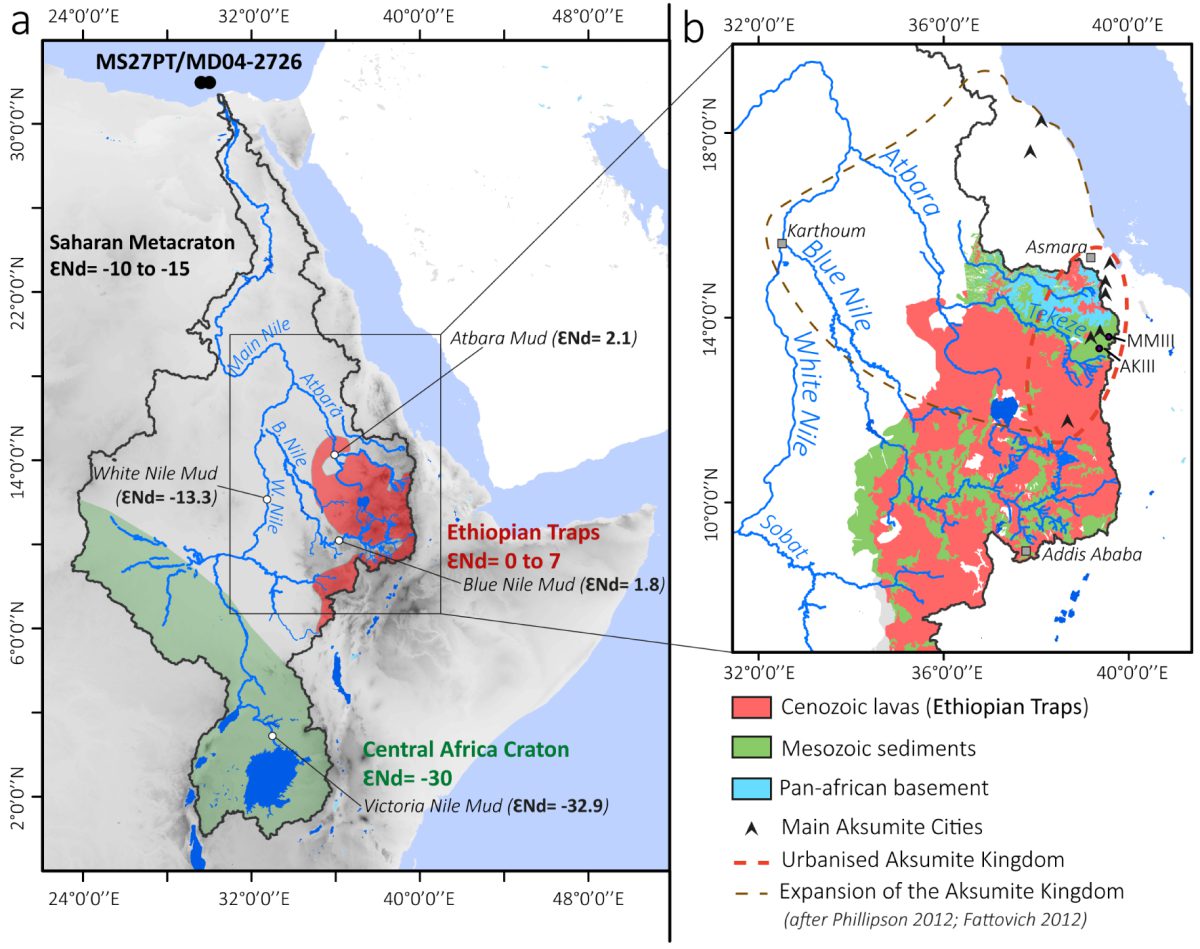 Human-induced environmental disturbances during the Holocene have provided support for the Early Anthropogenic Hypothesis (EAH), which proposes that with the advent of agro-pastoralism and associated deforestation, humans have modified CO2 and CH4 concentrations into the atmosphere. However, only limited evidence exists for human driven chemical alteration of the Earth’s Critical Zone (ECZ) in early antiquity. Here, we explore the impact of human activities on both erosion and chemical weathering patterns in the Nile basin during a time interval that includes the rise of the Aksumite Kingdom and Late Antique Egypt (∼3–∼1 ka BP). By coupling lithium and neodymium isotopes (δ7Li, εNd) in clay-size fractions of two marine sediment cores from the Nile Deep Sea Fan (NDSF), we reconstruct the variability of sediment provenance and silicate weathering intensity in the Nile basin over the last 9000 years. Our high temporal resolution data show that for the last ∼3000 years, the Rosetta Nile Deep Sea Fan has been increasingly fed with clays delivered from the Ethiopian basaltic highlands (εNd=∼-1), despite the absence of hydrological intensification and major climatic drivers over that region. Concomitantly, the clay Li isotopic composition shifted towards lower δ7Li values (δ7Li=1 to –2), yielding unprecedented negative values for at least the last 100,000 years. Combined with other archaeological, paleo-pedological and organic chemistry inferences, the Li–Nd isotope proxy records indicate a link between the intensification of continental weathering and intensified land-use and water management during the Pre-Aksumite (∼3 to ∼2 ka BP) and Aksumite (∼2 to ∼1 ka BP) periods. Therefore, our results provide direct support to the hypothesis of an early and large scale anthropogenic forcing on continental chemical weathering. A comparison with previously published records for Central Africa, Central Europe and China suggests that the impact of the intensification of early agriculture on the ECZ may have operated at a global scale starting around four thousand years ago. 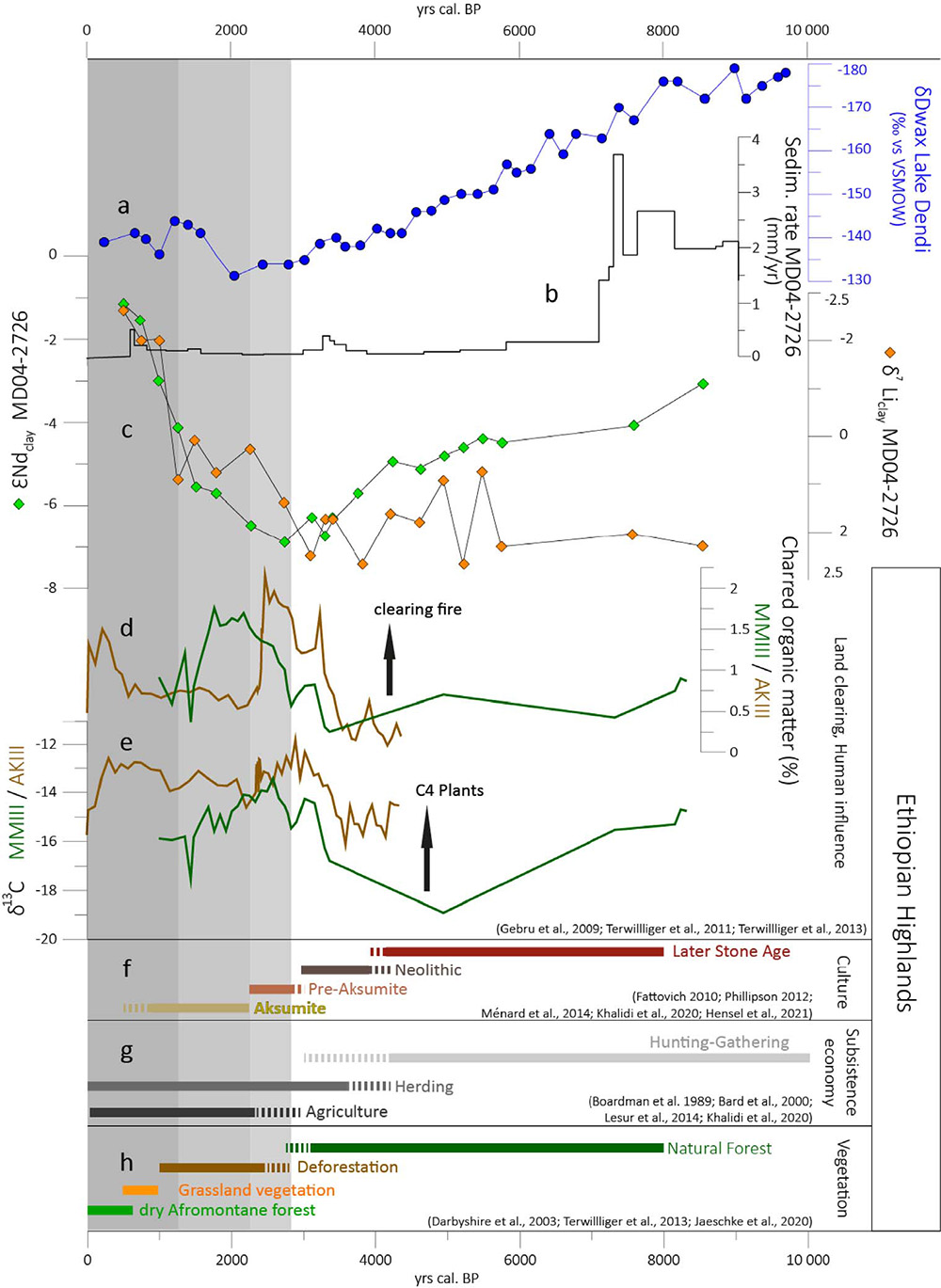 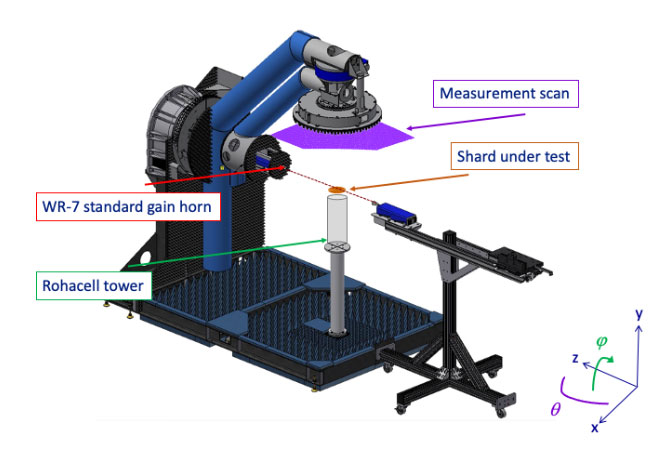 Abstract :
In order to map the migration and introduction of farming into Europe during the seventh and sixth millennia Before Common Era, archeologists have made a connection between the study of pottery and farming migration. We are interested here in the classification of pottery into coiling and spiral types based on their manufacturing techniques. To distinguish between these two techniques, we look for the lines formed by air bubbles embedded in the pottery samples. Current methods make use of bulky systems, such as computerized tomography scanners or synchrotrons. Microwave acquisition and processing offer an interesting alternative, due to the possibility to have compact and portable systems. In this article, we investigate the classification of pottery based on low-terahertz measurements in the D-band. We process the measurements with 3-D fast Fourier transform. The resulting matrix is classified with an artificial neural network, multilayer perceptron, which is optimized with the gray wolf optimizer, a bioinspired algorithm. The first results show that the accuracy reaches up to 99% using all the acquired spatial and frequency measurements. Then, we optimize the millimeter-wave (mm-Wave) measurement system with a critical criterion on accuracy in two different scenarios. In the first scenario, we reduce the spatial acquisition but maintain the wideband operation and the results show that the accuracy is between 85% and 96%. In the second one, we reduce the spatial acquisition and use a single frequency. For this second scenario, we achieve a classification accuracy, which is between 77% and 100%. 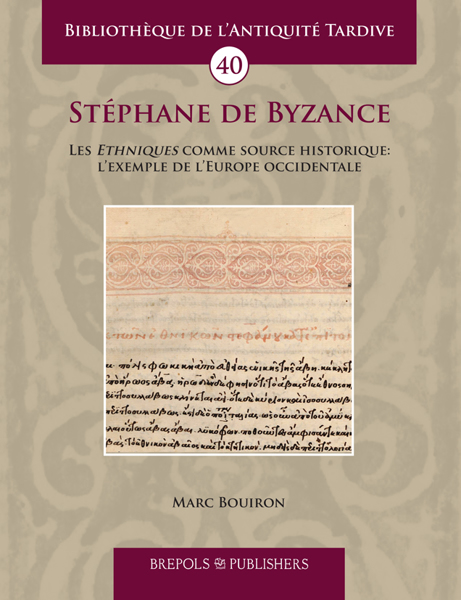 The variability of the northern westerlies has been considered as one of the key elements for modern and past climate evolution. Their multiscale behavior and underlying control mechanisms, however, are incompletely understood, owing to the complex dynamics of Atlantic sea-level pressures. Here, we present a multi-annually resolved record of the westerly drift over the past 6,500 years from northern Italy. In combination with more than 20 other westerly-sensitive records, our results depict the non-stationary westerly-affected regions over mainland Europe on multi-decadal to multi-centennial time scales, showing that the direction of the westerlies has changed with respect to the migrations of the North Atlantic centers of action since the middle Holocene. Our findings suggest the crucial role of the migrations of the North Atlantic dipole in modulating the westerly-affected domain over Europe, possibly modulated by Atlantic Ocean variability. 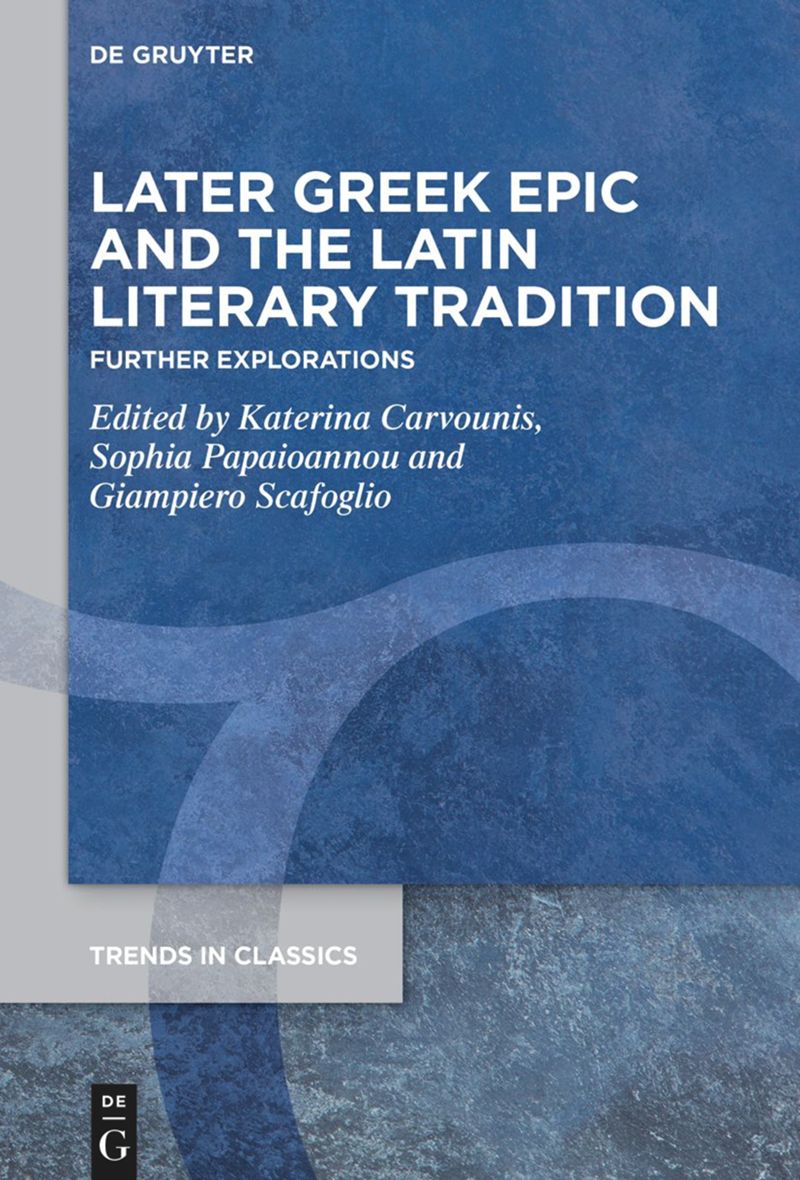 The volume offers an innovative and systematic exploration of the diverse ways in which Later Greek Epic interacts with the Latin literary tradition. Taking as a starting point the premise that it is probable for the Greek epic poets of the Late Antiquity to have been familiar with leading works of Latin poetry, either in the original or in translation, the contributions in this book pursue a new form of intertextuality, in which the leading epic poets of the Imperial era (Quintus of Smyrna, Triphiodorus, Nonnus, and the author of the Orphic Argonautica) engage with a range of models in inventive, complex, and often covert ways. Instead of asking, in other words, whether Greek authors used Latin models, we ask how they engaged with them and why they opted for certain choices and not for others. Through sophisticated discussions, it becomes clear that intertexts are usually systems that combine ideology, cultural traditions, and literary aesthetics in an inextricable fashion. The book will prove that Latin literature, far from being distinct from the Greek epic tradition of the imperial era, is an essential, indeed defining, component within a common literary and ideological heritage across the Roman empire. 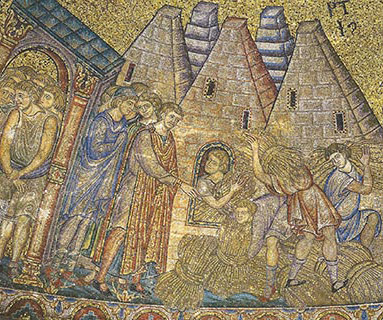 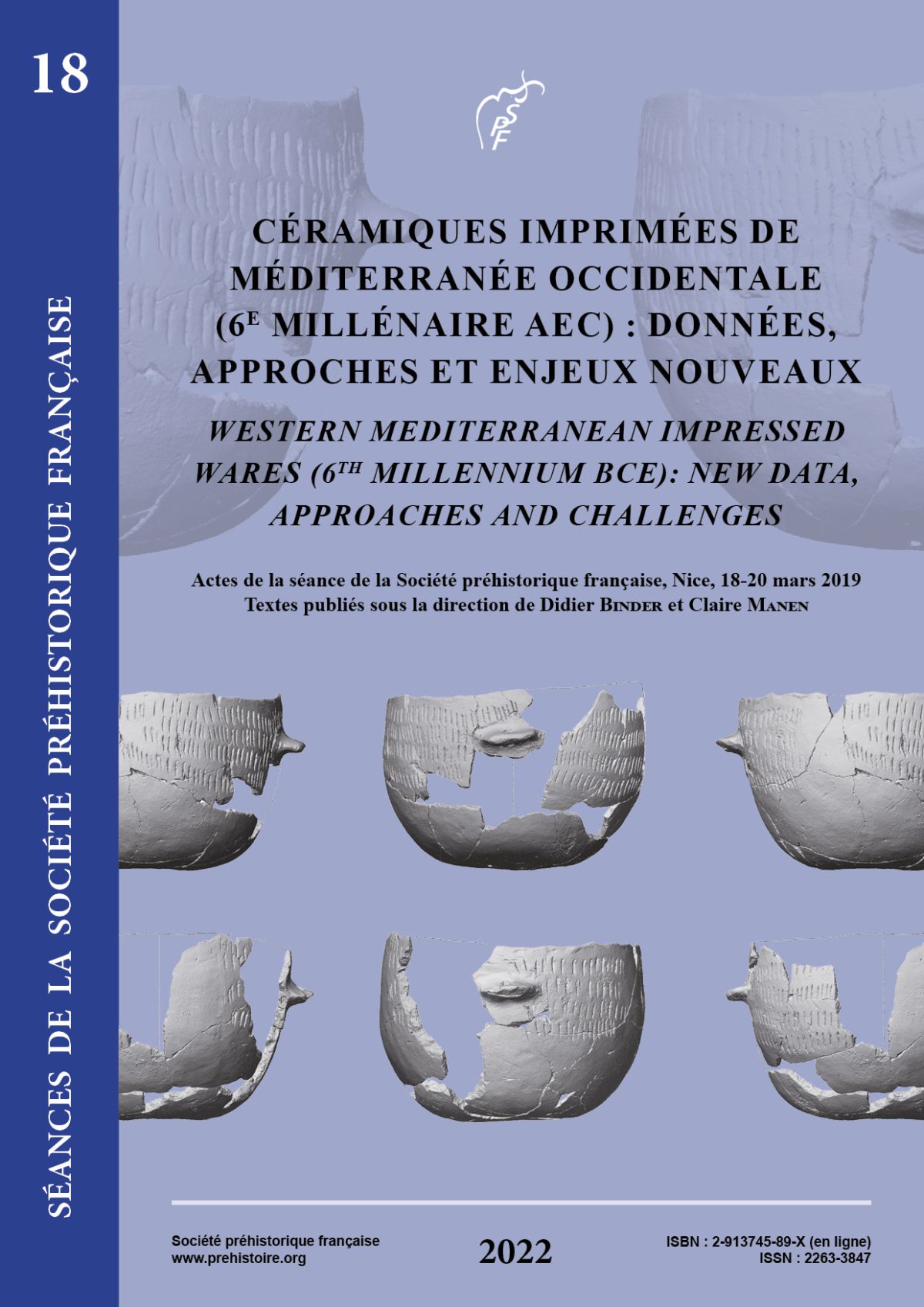 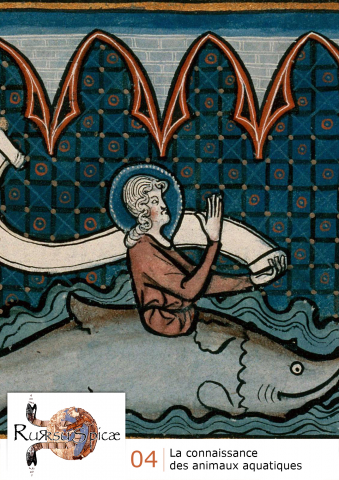 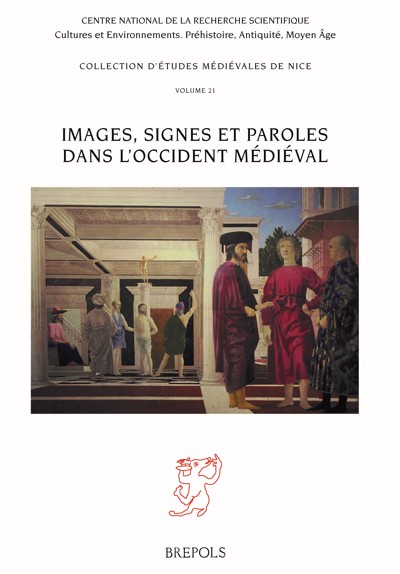